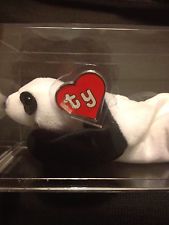 An authenticated Ty Peking the panda Beanie Baby sold on eBay on January 5, 2014 for $795.  It was a buy-it-now auction that was originally priced at $895.  However, the seller accepted a lower offer. The Beanie had a mint 1st generation heart tag and a mint 1st generation tush tag. True Blue Beans had authenticated the Beanie Baby. The seller, known as jordanw1 on eBay, had a  98.2% feedback rating.