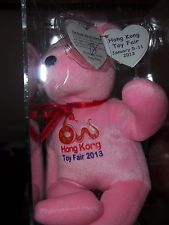 The heart tag was autographed by Ty Warner came and the Beanie came with a signed letter from Ty.   True Blue Beans had authenticated the Beanie and described it as MWMT Museum Quality.   The seller, known as keng205 on Ebay, had a 100% positive feedback rating.

The 2013 Hong Kong Beanie Baby was only distributed to Ty Employees at the Hong Kong Toy Fair.