1. Help raise money for charities. In October of 2001, Ty signed the heart tag on an America Beanie Baby and listed it with Ebay's Auctions for America. The winning bidder paid $24,000 for this one-of-a-kind bear which went directly to the September 11th Fund.

3. Add interest and value to a prize package. In October of 2000, a lucky collector in Germany received a complete set of autographed Zodiac Beanie Babies after winning Ty's Olympic Challenge Contest on TyTrade.

4. Build excitement at retail. In 2001, some consumers discovered autographed Clubby IV bears in their BBOC kits while a select group of Ty credit card users were randomly selected and received a signed MasterCard Beanie in the mail! 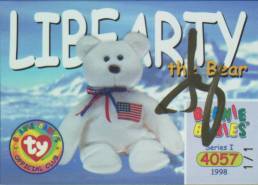 Ty Warner has also signed one of every card in the four different series of the Beanie Babies Official Club Collector's Cards. The highest price paid for the signature of Ty Warner was on a gold #1 Bear Collector's Card from the U.S. edition of Series 2. The collector from Massachusetts paid $13,900 for this card in 1999. 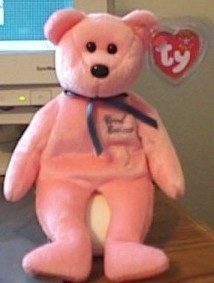 5. To reward Members of his Hotel Properties. The Coral Casino Beanie Baby was presented as a gift on December 9, 2001 at an open house reception dinner for members only of The Coral Casino Beach and Cabana Club located at The Santa Barbara Biltmore Hotel! Only 588 had been autographed and number by Ty Warner. The first Coral Casino bear on auction sold for $4,250!