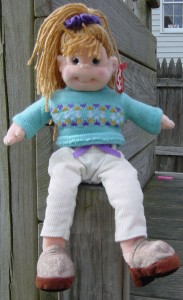 On June 23, 2001, Beanies Beanie Boppers made their debut at the Dallas Toy Gift Show. Beanie Boppers are approximately 12" long soft sculpted dolls similar to the Groovy Girls made by Manhattan's Toy Company. The first six Beanie Boppers introduced were all girls. They were Huggable Holly, Pretty Patti, Rockin' Rosie, Loveable Lulu, Kooky Kandy, and Sassy Star. While Beanie Boppers don't have poems like Beanie Babies, they have names, birthdays, hometowns and favorites plus they each have their own web page that lists more fascinating facts about them. Beanie Boppers had a suggested retail price of $9-$10.

To help increase awareness about this new line, Ty introduced the first boy Beanie Bopper, the Bronx Bomber, which came with a trading card and was used as a promotional giveaway to children attending the Yankee Game at the Yankee Stadium on August 5, 2001.

Over the course of three years, Ty introduced a total of 56 Beanie Boppers. Four of which came in two varieties. Christmas Carol may have white or green pom poms, Footies shirt may be white or blue, Hat Trick Hunter's jersey number may be 99 or 10, and Strikers boots may be white or gold. The line was retired at the close of 2004.