A royal blue Peanut the elephant Beanie Baby sold for $650 plus $10 shipping on May 17, 2011. The auction attracted just one bid. The Beanie was museum quality with a flawless 3rd generation heart tag. Becky’s True Blue Beans had authenticated the Beanie.

Just two months ago, this Beanie sold for $995 on eBay. Its current value will shock many collectors. 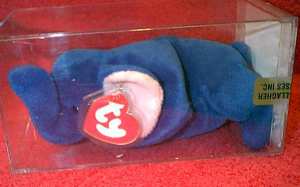