A Ty Springy Beanie Baby Bunny Prototype sold on Ebay for $650 plus $45 shipping on April 30, 2011. The Beanie was authenticated by Peggy Gallagher who rated the bunny as Museum Quality  and referred to it as “Rare Springy Prototype,” and states on COA #52005 — “Springy Prototype, PAX Trading Corp. Generation Tush Tag, Description:  Bunny Prototype, Magnificent Color, ONE OF A KIND.”  The seller noted, “the mass-produced beanie baby was this design but not the coloring.  The coloring on this one is absolutely beautiful!” 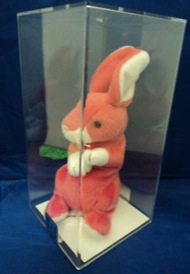 Posted in News
← Easter Special! Save $5 on our 2011 Price Guide for Ty Beanie Babies!Add Your Knowledge and Photos to SmartCollecting.com’s Value Finder →