Due to this excitement, I wrote a special report entitled, “A Market for Beanie Oddities,” in May of 2000 that documented the results of 18 different Beanie oddity auctions from one seller on Ebay. The highest price paid for a Beanie oddity among these auctions was for The End Beanie Baby that was missing its emblem that sold for $376.

Prices for Beanie Oddities continued to climb the following year. In 2000, a Kicks Beanie Baby missing its emblem sold for $177.50. A year later, the same Beanie sold for $478! It was an exciting time for Beanie Oddity collectors.

During the last decade, interest in Beanie Baby collecting has faded and values for Beanie Babies (including those with oddities or errors) have dropped dramatically. The time to sell a collectible is when the market is hot. Though you might not be lucky enough to sell exactly at the peak of the market, it is foolish to wait until the market has cooled.

Though statistically there is a greater chance of selling a Beanie oddity/error compared to one without a defect, prices are a fraction of what they used to be. Only 11 out of 27 completed auctions for Beanie oddities/errors actually sold. The two highest prices paid were $75 for a Chops Beanie Baby with a Pinky tush tag and $32.99 for a January Birthday Bear Beanie Baby that was missing its emblem. The remaining auctions were for swing or tush tag errors that sold for $8.99 or less. 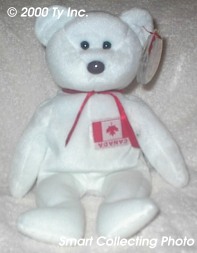 Despite the fact that the number of Beanie Baby collectors has fallen, those remaining still love excitement. Starting bids for Beanie oddities/errors are too high. In my article, “How to Get the Most For Your Beanie Baby Oddity,” published in August of 2001, one of my tips was to set a low starting bid. I cited that the starting bid for the Kicks Beanie Baby that was missing its emblem that sold in 2001 for $478 had a starting bid of $1.

So how much is your Beanie oddity worth? The only way to really find out is to list your item on Ebay with a low starting bid and use social networking to spread the word. Report you